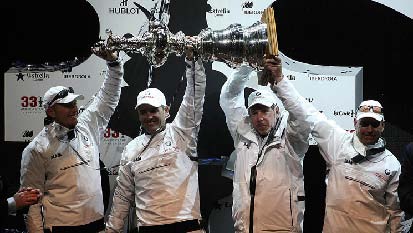 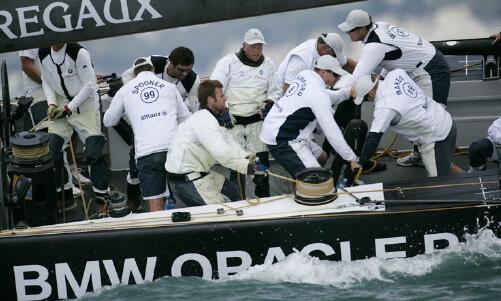 “Nothing separates the men from the boys during extreme competition such as the regattas leading up to the 07 America's Cup”. And, I wanted to share with RLI an interesting report I received from the field using the specially formulated, low foaming, high performance Bio-Ultimax fluid that you formulated exclusively for BMWOracle Racing. BMWOracle has constructed one of two of their 07 Cup boats. Their chief hydraulic fabricator technician and boat builder Rolf Engleberts, had called me about converting from their MIL SPEC 83272 fluid to the special Bio-Ultimax. And, I reviewed the flushing procedure with him. Two days later Rolf called me and said they changed out the old fluid to the Bio-Ultimax overnight without telling the sailing team. After the day of racing, the sailing team returned to port asking Rolf "what did you do to the hydraulic system?" Rolf replied, "what do you mean”? The grinders and pumpers all noticed less frictional operation. When Rolf told them that all he had done was to change out the fluid to the Bio-Ultimax special formula -they could not believe it. As a foot note, I was also told that any time they spilled the Bio-Ultimax such as in changing out a fitting. it was very easy on the hands too. Reported to be almost like a hand lotion.....but very easy to clean up. I share with you this comment because the MIL SPEC oils have a notorious reputation of eating up the sails stored under deck and are difficult to cleanup do to their wicking characteristics.The BMWOracle Team thanks RLI for your good work. We hope that BMWOracle Racing will bring back the Cup to where it rightfully deserves.....the USA!